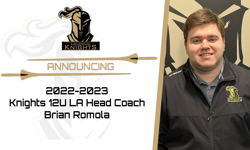 The Loudoun Knights are excited to announce Brian Romola as the Head Coach for the 12U LA team for the 2022/23 Season. The 12U LA team will compete in the CBHL and the EJEPL.

“Brian is a young ambitious coach eager to take a coaching position with the Knights and pour all his passion into our 12U kids”, says Loudoun Knights Hockey Director Craig Desjarlais.

“During the spring he has shown his dedication to the club and is eager to learn and grow as a coach. Brian had a very successful youth career and has a great understanding of the modern game. His emphasis with be to develop the skills of our players and create a fun and positive culture.”

After High school, Brian attended James Madison University, graduating with a health services degree.  During his time at James Madison University, he played 3 years of collegiate roller hockey for JMU as part of the NCRHA. He was a 2-time assistant captain and competed in the 2019 National Championship for JMU where he received an honorable player mention from the tournament.

Brian has always been rooted in the community and has a great passion and drive to teach and mentor players in hockey. Outside of hockey and work, Brian has been a firefighter in Loudoun County for 9 years and currently serves as a Sergeant with the Ashburn Volunteer Fire & Rescue Department. Brian is an active member of the Loudoun County Heroes Hockey, a local nonprofit to assist Veterans and First Responders learn to play hockey and help them field teams to participate in local leagues and tournaments.

Brian looks to combine his First Responder background and hockey experience into his coaching philosophy which will encourage accountability, team culture and team cohesiveness.

Please welcome Brian Romola as the Head Coach for the 12U LA Team for the 22/23 season!